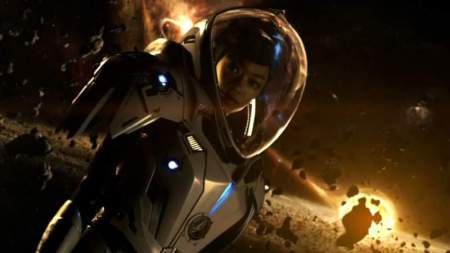 Star Trek has always been known to push barriers in terms of diversity, to such an extent it has almost become a cliche. But it is real and last night I took great interest in a line by one of the characters.

“Because of my special needs.”

The character then displayed certain traits that I was suddenly hopeful that we might see the first person with autism represented within the Trek universe. And no rain man type depiction either but a character who happens to have autism but it’s not what defines them, in fact maybe most people don’t even know. This might be pure speculation on my part but time will tell. Here’s my review of Star Trek Discovery episode three.

“Trek is boldly going darker than ever before. I always remember Wrath of Khan being pretty violent by Trek standards. It was one of the things that Roddenberry was unhappy about, remarking that the films were too militaristic. But this was maybe the most visceral and bloody episode of Trek I’ve ever seen. We saw distorted and melted bodies, glimpsed only briefly, but pretty grim.”

Read the rest of my review over at LSG Media

One thought on “Interest in Trek”