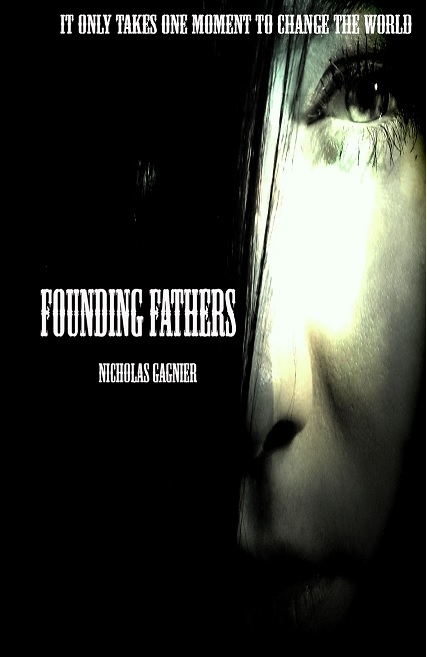 I often tell people, I’ve met this guy online, they chuckle and tell me to be careful. But this is how I met Nicholas Gagnier, a poet with a visceral style that spoke directly to me. It spoke so directly to me that I reached out to him and we wrote a song together based on his words. His talent stood out from the crowd and I looked on with interest at what he might do next.

People sometimes ask me why I reach out to my fellow writers, why am I so fascinated in the creative process? The answer is simple, it’s not to gain the chance of some reflected glory, or about talent spotting, it is simply about connection. The noise of hate and intolerance is out there if you want it, it’s very hard to miss, but buried amongst the egos and the confederate flags, there is something remarkable happening.

An independent revolution, or to borrow Nick’s phrase, a free verse revolution: A collection of talented writers telling the truth. What truth is that I hear you ask? Well the only truth there has ever been, their own truth. It is these loose and eclectic alliances that I cling to, in the hope I can encounter truth and artistic integrity. With these thoughts swirling around my head I approached Gagnier’s first full novel with some trepidation. Would it live up to my expectations?

“The door opens, and Viktor Quinn, a redhead right down to smouldering eyes and charm that catches like fire on drapes, greets me with a grin.”

It didn’t take long for me to settle into the new paradigm of Gagnier writing prose with the lines flowing but never flowery. It captures the rhythms and beats of his incendiary poetry, a nihilistic fury to every line, as if each word had been angrily waiting to be set free by its author. There are shades of Kerouac in this novel, a sad humanity to the characters reminiscent of On the Road.

Founding Fathers is a terrifyingly believable story of a supremacist uprising. The characters perpetuate acts of extreme violence whilst an anti-hero in the guise of Peter York is thrust before us, looking helplessly on, passively enabling events. This is Peter’s great conflict and through him Gagnier forces us to face the frightening truth that Peter is us.

We’ve watched Charlottesville on the news, seen the rise of right-wing groups after the election of Trump and the Brexit vote, but what are we really doing and what would we do if that barely repressed violence turns its ugly visage onto our neighbours and onto us and our families. Would we just stand by and watch Rome burn as Peter initially does?

Whilst reading Founding Fathers I am reminded of Christopher Browning’s book “Ordinary Men”, about a group of ordinary policemen in Nazi Germany, who were trained in execution and followed their orders as if it was just another component of their training. Directing traffic one day, a change of government and shooting people into open graves the next. Browning’s chilling hypothesis being that there was no special circumstances in Germany, these were men with no history of anti-antisemitism, just ordinary men, a warning to us that it can and does happen anywhere.

“Freddie!” I scream, but there is no scream, a smothering pillow over the face of one, a scream in name only.”

The dialogue and descriptions fizz along, a sign of an author who has really found his voice. The narrative is shown from the perspective of the main characters, Peter York, low-level drug dealer, Samantha, a soon to be divorcee trying to keep her shit together, and finally Viktor Quinn and Sydney Mayhew, the Bonnie and Clyde of white-supremacy. These are the main voices until we have an odd passage where the characters appear to be visited by angels. The author  deals with this in self-deprecating fashion with Olivia (who may or may not be angelic) describing herself as a Deus ex-machina, which made this reader laugh. It is initially jarring but in the context of the story as a whole it works and adds to the book’s charm.

Whilst the story is grounded in the present day it has a dystopian feel. It’s the Purge meets The Five People you Meet in Heaven, an offbeat fantasy with extreme violence but the heart of a Jimmy Stewart movie. Peter’s life is fucked up, but that’s the case for so many of us, and he’s a beautiful loser, who I almost immediately root for.

Founding Fathers is a meta-narrative exploring the themes of good versus evil, is there a puppet master God pulling at the strings. We are posed questions about predestination versus Freewill.

The novel takes another swerve at the end serving up a poem, and it’s a fluid, furiously visceral Gagnier special. The poem works to tie together all the narratives, forcing us to look back over what we think we’ve just read. It acts as context for the apparent angelic and demonic forces at play. The Deus ex-machina extraordinaire is the author himself, making us question everything because that’s the one power we all have, the power of asking ourselves what’s behind the headline or the social media panic, where’s the truth.

This is a daring and thrilling debut. Gagnier has not plumped for the easy option, this is no straight forward action thriller, it’s trickier than that. As the final act appears to hit some familiar action beats, it’s a bit like Die Hard with the villain taking hostages and rigging up a massive bomb, I kept waiting for a rug pull or twist that never came because that would have been too obvious and besides the rug had been pulled some time ago.

The writing throughout reminded me of a Stephen King novel, Revival, another seemingly benign narrative with one of King’s most unpleasant and terrifying visions lurking within its black heart. Founding Fathers hits a similar groove, there’s more under the surface, literally and metaphorically.

The characters are fully three-dimensional and Gagnier also writes convincingly from the female perspective, no mean feat. The plot is fast, exciting and always interesting. The story shows a contained incident of white-supremacy with only a hint that there may be national unrest, a smart trick that allows us to really connect with the main characters. And whilst the world is falling apart around them, Sam and Peter are finally pulling themselves together to bring a meaning to their lives that they thought had been lost.

One thought on “Founding Fathers by Nicholas Gagnier – Review”