Imagine if it transpired that a long lost Shakespeare play was uncovered. Or a diary of a significant historical figure was found lying in a vault. It is exciting to think that there may still be manuscripts from major writers that have never seen the light of day. It is this excitement to discover previously hidden truths that is exploited by the perpetrators of literary fraud. It is a subject that fascinated me when I studied for my BA in history and this is when I first came across literary fraud, specifically in the form of the Hitler Diaries, these were journals that purportedly contained the thoughts of Adolf Hitler.

They were authenticated by celebrated British historian Hugh Trevor-Roper, and although he later changed his mind, his approval helped prove integral in their serialisation in a major newspaper. The diaries were actually forged by Konrad Kujau between 1981 and 1983 who sold them for a huge sum of money. Trevor-Roper’s reputation was forever tarnished by his association with the diaries and I have always felt rather sorry for him, because I don’t think it should have changed the way people viewed all his previous work over a long career.

I was fascinated in this area because there is something deliciously intriguing and Indiana Jones-esque about the idea of finding ancient antiquities. If someone discovered a new novel by Twain or Hemingway imagine the excitement, or maybe a lost episode of your favourite TV show, Star Trek or Doctor Who? This excitement would then quickly turn to anger once you realised you had been duped but then this all adds to the air of scandal.

These are my top five greatest literary frauds.

5. Vortigern and Rowena by William Shakespeare (Not)

This fake Shakespeare play was he product of prominent forger William Henry Ireland. It was performed once at the Drury Lane Theatre before its false provenance was revealed. 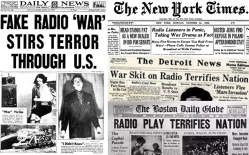 When Orson Welles read War of the Worlds on radio, incorporating real life sound effects, it apparently prompted mass hysteria by some Americans, who believed that martians had really come to destroy the earth. But this fake news broadcast, turned out to prompt maybe the first real example of mass media fake news because the large-scale panic caused by the War of the Worlds is apparently not true. New research has shown that fewer people listened to the broadcast than popularly believed and there was nothing approaching panic amongst those who listened to it. That is a shame as I have always loved this story, still a fun one though.

Thanks to the Smithsonian magazine for this one as I had never heard about it. Here’s what they had to say about it…

“Writer Clifford Irving had already received a $765,000 advance and had delivered his manuscript of The Autobiography of Howard Hughes to publisher McGraw-Hill by the time the billionaire industrialist finally came forth to sue the publisher, saying that he had never met with Irving or given his approval for the project. Irving had gambled badly that the reclusive Hughes would never surface to denounce the hoax. By forging letters and setting up phony interviews, Irving had convinced the publisher and several key experts that the autobiography was authentic. He’d also managed to obtain a copy of a manuscript about Hughes’ right-hand man, which gave Irving’s work its remarkable detail. After the swindle unraveled in 1972, Irving spent 17 months in prison. His book on the experience, The Hoax, was made into a film starring Richard Gere in 2007.”

A slightly cheeky inclusion in a list about literary fraud but I feel strongly that had Harper Lee had full capacity to make decisions then this very belated sequel of To Kill a Mockingbird would never have been released. It was in fact a book she wrote before Mockingbird but on the advice of her publisher she re-worked it into the classic we know and love. I can’t help but think this was a commercial decision not motivated by the best interests of the author. And the world really could have done without the revelation that Atticus Finch was a racist.

For me the top one is still the diary of Hitler. This had historians climbing over each other to denounce or verify the existence of the inner thoughts of one of history’s evilest dictators.