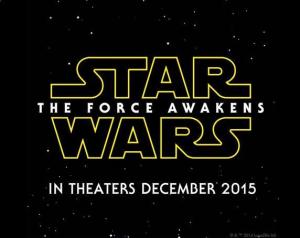 This blog is delighted to announce that a source has confirmed a rumour that this blog post is indeed about Star Wars. My source (a very reliable one I promise) goes on to state that this blog post will contain absolutely no factual information regarding Star Wars Episode 7 or the Force Awakens as the studio lawyers now insist we call it, but it will certainly contain plenty of wild speculation and some stuff that I made up.

I am excited to confirm that Benedict Cumberbatch has 101% definitely signed on the dotted line to play a character in the Star Wars universe. His role is thought to be that of a rogue detective/Jedi/Sith/Definitely not Khan/Voice of a dragon. This exclusive was confirmed when Graham Norton asked him in an interview whether he would star in the new Star Wars film and he replied “No definitely not”, which I think we all know is tantamount to admitting his involvement.

The other important Star Wars news of the day is that the ghost of Harrison Ford’s career has confirmed he will reprise his role as a much older but no less cantankerous Han Solo. Ford’s spokesperson also confirmed he would be performing all his own stunts unless JJ Abrams throws the Millennium Falcon door at him. (AGAIN)

Carrie Fisher’s agent wondered whether his very title was an infringement of the trade descriptions act.

The film will almost definitely star some guy called Mark Hamill, best known as the voice of The Joker in Batman cartoons.

Speculation is mounting that this blog post is very silly. Meanwhile my neighbour who knows JJ Abrams’ Mum really really well (well she thinks she saw his Mum once in Walmart but it may have been Mrs Jacobs from number 38) told me that episode 7 will definitely be set in space and will not have dinosaurs in it but may feature a cameo by William Shatner. (no wait that’s Star Trek 3 OR 11 depending on when you were born)

Update – I experienced such child like excitement when viewing the new trailer I wanted to share it. All my adult cynicism melted away and my hopes are high that the film is going to be awesome. I will spend the next year trying really hard to avoid spoilers so I do not experience the “Khan Factor” again.

My review of this teaser trailer is just two words and a smattering of exclamation marks… Millennium Falcon!!!!

One thought on “Star Wars – The Force Awakens (Teaser Trailer)”