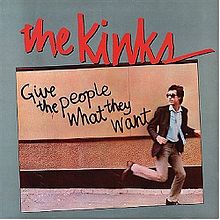 Give The People What They Want

Starting with Muswell Hillbillies the Kinks began a long tumultuous affair with America, they seemed to yearn for what they couldn’t have but when they finally did “make it” in America, it brought them a period of sustained critical and commercial success in the States.

However their relentless touring schedule eventually took its toll and Ray Davies sounds jaded and maybe for the first time in their careers Davies and The Kinks didn’t give the people what they want. It is an inevitable consequence for bands that have toured as extensively as the Kinks, that eventually a wall is hit. The tension of spending so much time together and aspects of Davies’ personal life fracturing had an impact on the band’s creativity and some of Davies’ lyrics lack the sharpness of old. This leads to Davies spending much of the album sounding a little tired, fed up and cynical.

That said, I think the author of an unparalleled run of brilliant tunes and the creator of some of the finest moments in Rock/Pop history, should be cut a little slack. Because ultimately “Give The People What They Want” is by no means a bad album, in fact it is a good album. It is just that Davies himself has set the bar so high that it suffers in comparison to all that has come before. If Low Budget is frenetic and teeming with nervous tension, “Give The People” is lethargic and tetchy and sometimes a little generic.

The track Destroyer just doesn’t work. It has all the ingredients to do so and the idea of referencing and sampling songs from their own back catalogue (Lola, All Day and All of The Night) is clever but the song itself is a bit of a mess. Whereas a similar revisiting of old songs Return To Waterloo, from the later album of the same name, is a majestic synth-tinged gem. (Look out for reviews of the album and film coming soon)

For me the finest moment on “Give The People..” is the track that closes the album. Better Things is beautiful, full of heartache and dripping in melancholy, it says all you need to know about where Davies is in his life. Another highlight and a classic “slice of Ray” is Art Lover, which is loaded with Davies’ formidable wit. The record also sees Mick Avory and Dave Davies in very fine fettle indeed and the album is probably best reflected as a live piece and this is no bad thing.

As a microcosm of how the band is feeling about life on the road and each other in general, Predictable is a brilliant statement. It serves as a tacit acknowledgement by the band of their own fatigue and conflicts within and also takes a swipe at the personality-free predictable nature of the music industry.

I am really fond of this album and find it difficult to critique the work of someone with the track record of Ray Davies, once you have written pop perfection like Waterloo Sunset, it is hard to follow-up. But Davies has consistently tried to follow it up, he is always trying to write a better song and this is what makes him special. He should be cherished as he has never jumped on a trend, like some of his contemporaries who have tried all things from hip-hop to dance, and this makes him unique.

For any Kinks’ diehards this album has more than enough gems to keep you going and is a must for your record collection. For the uninitiated I would recommend looking this up and given a few spins, “Give The People What They Want” will soon be one of your favourites.

To get future Kinks’ reviews and the latest news on my upcoming projects, why not subscribe to my blog? It is free and it means you will receive my posts directly to your inbox, so you needn’t ever miss a post again.

COMING SOON – Bigger, scarier, definitely not a laughing matter – “The Oregon Joker and Other Unlikely Tales” e-book. For a sample of what to expect from the book, read The Oregon Joker – Part One,