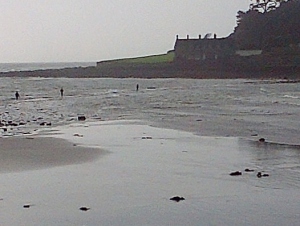 The Sea had almost completely covered the path, within less than two minutes I would be drowned and there was nothing I could do to prevent it..

I wasn’t going to give up so I thrashed and kicked against the inevitable, it was no use though, I was losing the fight. I was exhausted and cold and the water was now repeatedly washing over my face and I was being dragged into the ocean. Another wave crashed over my face and into my mouth, soon I would be consumed by the waves and my life extinguished. Just as I began to drift and curse whatever entity looked over me, I was hauled up by someone or something and bundled into a boat.

Back on dry land, I was kindly given some hot chocolate and a change of clothes by the coastguard. They told me that a small child playing with their dog had noticed a large sack on the path, the child had alerted his parents, who after some minutes decided to report it to the people who ran the island. There was usually an alarm warning tourists that they needed to head back to the mainland, and they had staff on either end of the causeway shepherding people back to the mainland and stopping people from heading onto the path when it wasn’t safe. But whoever had hit me and put me in the sack had been clever, they had placed me just off the path and the sack was a nice dark colour, making it hard to see me. In addition to these factors the sack almost covered my face, further completing my near fatal disguise. The police would no doubt want to speak to me and just as the thought crossed my mind they arrived.

The stern looking police officer approached me, his build and demeanour quickly dispelled any prejudice that I may have had about police in small areas being like those portrayed in the film Hot Fuzz. This was no bumbling country idiot with a love of doughnuts, this chap meant business and he got straight down to it.

“Fancy a dip did you Dr.Manning?” The officer had already begun to make notes and I had yet to utter a word.

“It seems officer that everyone in Cornwall has me at a disadvantage, by knowing who I am. I must say I am flattered it makes me feel like a celebrity” Even when damp and having just diced with death, it seems I still retained the ability to piss people off with my sarcasm. The officer just eyed me with curiosity, he definitely had something on his mind, and it was almost as if he expected to be here.

“Why don’t you tell me Dr, why you were on the island today and how you found yourself in this little predicament?” I was really beginning to get the feeling that I wasn’t welcome in Cornwall and my patience was at breaking point.

“Why don’t YOU give me your name and collar number please Constable, I may need it when I finally get to write my article” The officer eyed me sternly.

“Fair enough Dr. There is no need to get agitated, I know you have just experienced something rather unpleasant so I will let your outburst go. PC Marshall and my collar number is 2371.”

I nodded aggressively and realised that I had no pen or paper to write the information down, but I nonchalantly ignored this fact and pretended that PC Marshall hadn’t noted this with amusement. “Listen here Marshall, I haven’t just experienced something “unpleasant”, someone has just tried to fucking kill me, no doubt some Cornish pasty munching, mermaid fucking, nutter.” Marshall suppressed a smirk and then observed me coldly, as was the case with Jackson earlier, there was something off about him. This whole trip had turned into some kind of nightmare and I was on the verge of going home.

“Can I give you some advice Dr. Manning?” I nodded half-heartedly, what I wanted him to do was either his job or to go and fuck himself. If he could do both then that would be perfect.

“I advise you to clean up and go home, not back to your hotel but back to Oxford, people in Cornwall are proud of their heritage and traditions, they don’t enjoy being made fun of.” He closed his note-book, took one more look at me and started to leave.

“Aren’t you going to ask me what happened and do your job and actually look into this, this attempted murder?” Not prepared to yield I met his hard gaze fully and did not break eye contact, I needed him to know that I would not be threatened or frightened, even though I felt both.

“Oh I think I know what happened Dr. Manning, I have taken witness statements from onlookers, a lot of people heard your heated exchange with the Councillor.” He nodded, “Take my advice Dr, be a good boy and go home and save yourself a lot of bother, good-bye” He turned and left the room and I was left stunned and silent by the strange turn of events.

I had awoken early the morning after my “incident” at the Mount. I dressed quickly, skipped breakfast and drove to the house of Seth Chambers. I planned to meet with the old man as agreed and then get the hell away from Cornwall and never return. With all my strange encounters I now had more than enough material to write several articles. I arrived at Chamber’s little stone cottage about 15 minutes early, he had advised me to leave my car in the National Trust car park at the top of his lane. I headed down a small track as per his instructions and entered the gate, his cottage was on Bodmin moor itself, a little ramshackle abode with the bleak and blustery moor as its endless backdrop. As I approached the door I noticed it was open, I had a sinking feeling. Every other encounter I had had so far had been bizarre, so why would this one be any different. I knocked on the door and called out “Mr Chambers” My voice echoed back to me and I was met with silence. “Mr Chambers, it’s Dr.Manning, I am here to talk about the piskies, as arranged on the phone!” More silence. I crept down the corridor and looked in a few rooms, I found an empty bathroom and bedroom. The place had a dusty old feel to it, wooden floorboards, white walls and basic furniture. I headed into a door at the far left-side of the corridor, the curtains were drawn so it was very dark, on the other side of the room there was a stair case, and under the staircase there was a little alcove where Chambers evidently collected paperwork or some kind of records. There were piles and piles of cardboard boxes, some with their lids hanging off revealing stacks of paper. All the boxes were marked with numbers, 1970, 1975, 1980 and so on, I quickly realised that they seemed to denote years.

Intrigued I started my way over to the boxes to investigate, I stopped in my tracks halfway across the room because there was someone sat at an old-fashioned bureau in front of the curtained window. “So sorry Mr Chambers, I didn’t notice you there and I called……” The last words stuck in my throat because I now noticed that the person at the desk was slumped forward, I moved tentatively towards the figure and with a growing sense of danger saw a shot-gun by their side. As I drew level with the person I could see that there was a gaping hole where the back of his head should have been, he had clearly shot himself. I was numb and felt incredibly sick, bile had risen in my throat, I couldn’t tear my eyes away from the wound. I can tell you, it doesn’t matter how many TV shows you watch, no amount of Silent Witness can prepare you for seeing the real thing. My thoughts were just a jumble of chaos, no matter what had happened up to this point, this was now serious. I was way out of my depth and all my bravado had now shrunk to reveal the frightened individual I really was. I had just about formulated a plan to leave and call the police, on my journey out of Cornwall, when I heard voices at the front door.

For some instinctive reason, I knew that the people at the door would not welcome my presence, so I scrambled to the alcove under the stairs and I hid behind a stack of boxes. The voices were getting nearer and I could now hear what they were saying… “Chambers needed to be shut up, have you seen the boxes? Do you know what he was planning and what that means for us? The doddery old fool, suddenly developing a conscience. We all knew the price when we made the deal, no point getting cold feet now. There is quite literally nothing we can do about it anyway! Come on let’s sort out his body”

It was Councillor Jackson….